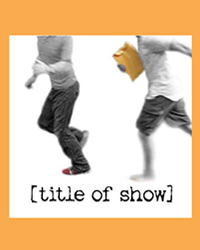 Critically acclaimed musical [title of show] depicts struggling writers Hunter and Jeff as they race against a deadline to write an original musical and submit it to a festival. As the deadline looms, insecurities creep in and jealousies flare. A treasure among theatre nerds, [title of show] comes stuffed with Broadway references, industry in-jokes, snappy dialogue and witty lyrics. Frequently hilarious, occasionally heartbreaking and thoroughly inspiring, this musical love story celebrates the individuality and creativity that lies within all of us.

Until further notice, masks required while in the building, and no food or beverages allowed. Please inform your guests.

Buy To This Event Directions