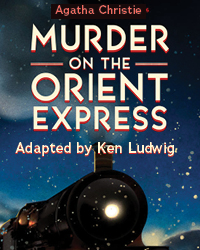 Murder on the Orient Express

Just after midnight, a snowdrift stops the Orient Express in its tracks, and by morning it is one passenger fewer. An American tycoon lies dead in his compartment, stabbed eight times, his door locked from the inside. Famous detective Hercule Poirot is called upon to investigate the murder, and each of his fellow travelers is suspicious. Dame Agatha Christie’s famous story was adapted into this comedy-mystery for the stage by playwright Ken Ludwig.